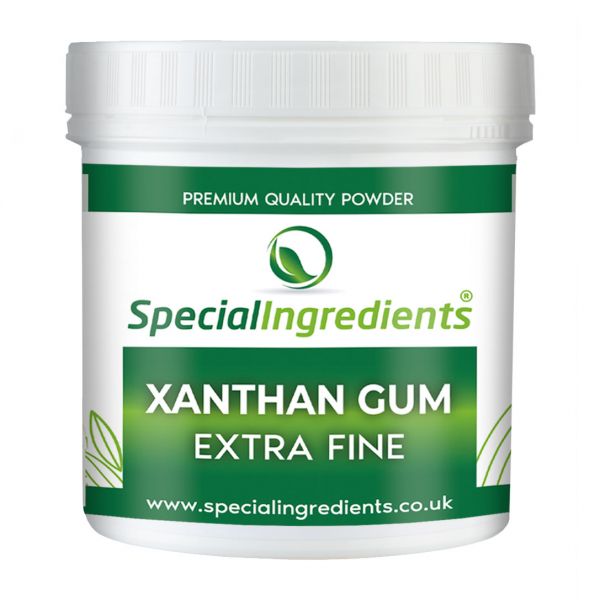 Our Xanthan Gum is 200 mesh compared to the standard 80 mesh, this means it is finer than standard Xanthan Gum making it easier to disperse and dissolve. Xanthan Gum is a food additive and is commonly used as a thickener, stabiliser, emulsifier and foaming agent. It is mainly considered to be non-gelling and used for the control of viscosity due to the tenuous associations endowing it with weak-gel shear-thinning properties. However, when added to other hydrocolloids, gels can be produced. Xanthan Gum can be added to Agar Agar and Kappa Carrageenan to form a more stable gel. The consistent water-holding ability of Xanthan Gum may be used for the control of syneresis and to retard ice re-crystallisation (ice crystal growth) in freeze-thaw situations. It can also be used in pastry fillings, to prevent the weeping of water in the filling, protecting the crispness of the crust. It can also be added to ice cream to prevent ice crystals from forming. It will produce a large increase in the viscosity of a liquid by adding a very small amount (around 1%). However, in most applications, it is used at 0.5% or even as low as 0.05%. In foods, it is often found in salad dressings and sauces. It helps to prevent oil separation by stabilising the emulsion. Xanthan Gum also helps suspend solid particles, such as spices. Used in frozen foods and beverages, it helps create a pleasant texture in ice creams and does not change the colour or flavour of foods or beverages. Suitable for Vegans & Vegetarians, Non-GMO, Gluten Free.

How to use: Xanthan Gum can produce a large increase in the viscosity of a liquid by adding a small amount (usually around 1%), however, in most applications, it is used at 0.5% or even as low as 0.05%

Storage Conditions: Store in dry, cool conditions and not in direct sunlight. Use within 6 months of opening.

Labelling according to EU & UK Regulations.